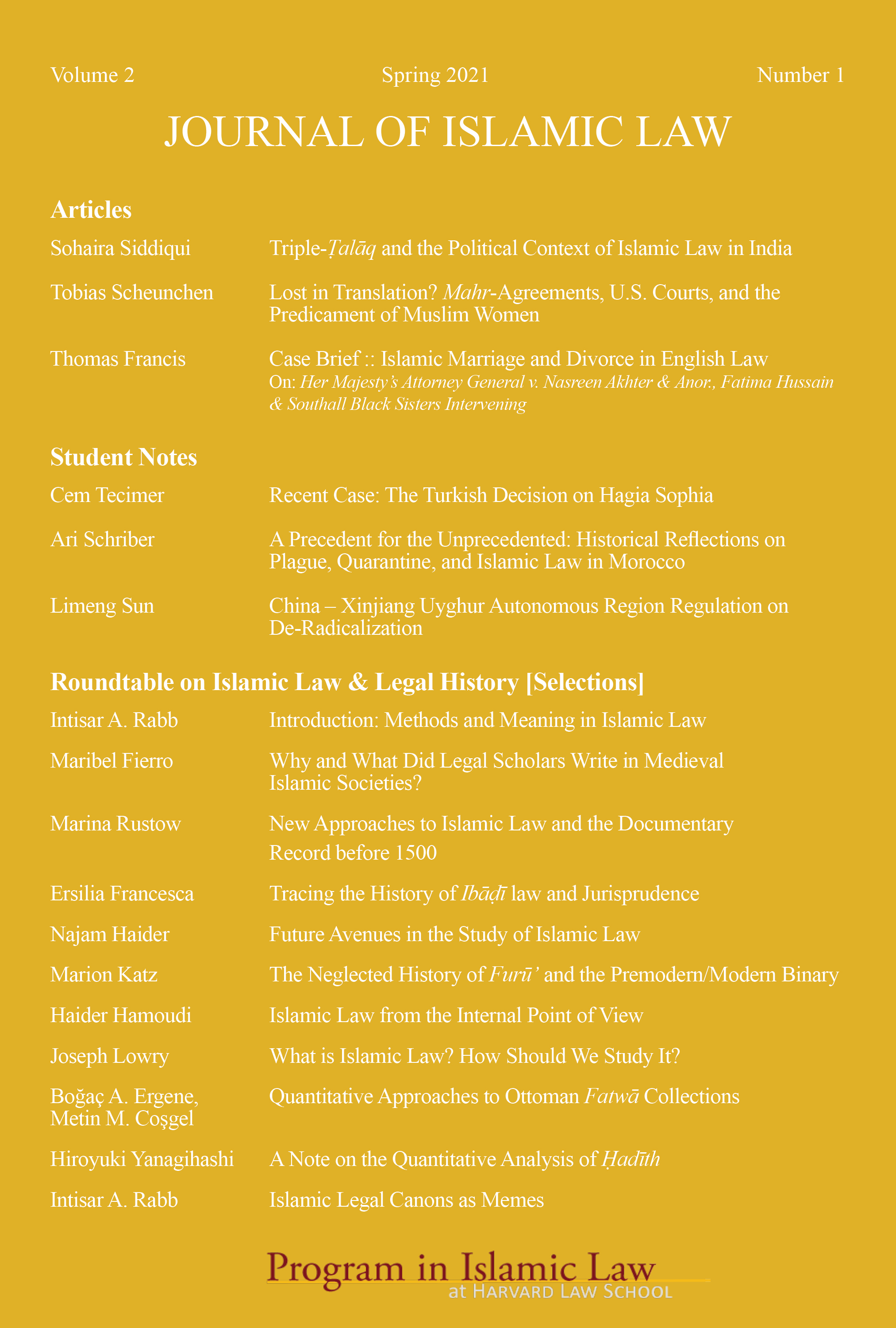 Maribel Fierro’s motivating question is "[w]hy books dealing with specific subjects were written at specific times and in specific contexts." Relying on a dataset compiled by Historia de los Autores y Transmisores de al-Andalus (HATA), a project she directs that aims to map the intellectual production of al-Andalus, the author observes that the majority of scholarship produced by Andalusi scholars were fiqh and poetry texts. The former, she argues, is likely explained by the professional opportunities enabled by engaging in the study of fiqh at the time compared to other genres. What makes such research possible is the breadth of the dataset, in no small way thanks to the collegial sense of some of the scholars during the Andalusi era, exemplified by the case of Ibn al-Ṭallāʿ(d. 497/1104) whose Kitāb aqḍiyat rasūl Allāh lists thirty-four of the sources he relied on.

The Cordoban Mālikī scholar Ibn al-Ṭallāʿ (d. 497/1104) authored a number of legal books dealing with contracts (wathāʾiq), patronate (walāʾ), and other subjects. He also decided to write a book on the judgments or sentences issued by the Prophet Muḥammad, the Kitāb aqḍiyat rasūl Allāh, when he realized that the subject had been largely overlooked: he found only one book, by Abū Bakr b. Abī Shayba (d. 235/849), which he described as being "small."[1] That ‘small book’ (kitāb ṣaghīr) is in fact included in Ibn Abī Shayba’s Muṣannaf; to my knowledge, sections devoted to aqḍiyat rasūl Allāh or aḥkām al-nabī are not found in other ḥadīṯh compilations, although the ḥadīths quoted by Ibn Abī Shayba can be found in them under other headings. Ḥajjī Khalīfa (d. 1067/1657), in his Kashf al-ẓunūn, mentions Ibn al-Ṭallāʿ’s work, of which he must have seen a copy, since he quotes its opening passage. He also mentions another work on the topic, the Kitāb aqḍiyat rasūl Allāh written by the Ḥanafī scholar Ẓāhir al-dīn ʿAlī b. ʿAbd al-ʿAzīz b. ʿAbd al-Razzāq al-Marghinānī (d. 506/1112).[2] Later, in his supplement to Ḥajjī Khalīfa’s bibliographical compilation, the Hadiyyat al-ʿārifīn, Ismāʿīl Bāshā al-Baghdādī mentions another early author, the Egyptian Mālikī scholar Muḥammad b. Aṣbagh b. al-Faraj (d. 275/888), who wrote a book on Aqḍiyat al-rasūl that Ibn al-Ṭallāʿ does not seem to have had knowledge of, and which now seems to be lost.[3] While Ḥajjī Khalīfa asserts that al-Marghinānī’s work gave rise to commentaries,[4] such was not the case with Ibn al-Ṭallāʿ’s work. It did, however, circulate widely, with at least eight manuscripts preserved, mostly in Turkish libraries but also in India, and with more than six modern editions from 1927 to 2003, as well as a translation into Urdu.[5]

Ibn al-Ṭallāʿ was careful to explain the state of the art (although he omits Ibn al-Aṣbaghʾs work) and lists the thirty-four works that he used as sources.[6] By doing so, we may recognize in him a ‘colleague,’ a scholar who did things the way they ought to be done. Making the effort to fill a gap in the extant literature on a subject seems to us a commendable undertaking in the scholarly world today, and one that by itself could explain why Ibn al-Ṭallāʿ wrote his book. Should we look further into the matter? One may think that interest in the sentences of the Prophet would have been widespread among the Shāfiʿīs and the Ḥanbalīs. Why then did a Mālikī like Ibn al-Ṭallāʿ think that the subject deserved more attention than that offered by Abū Bakr b. Abī Shayba? Did it have to do with the fact that those sentences were issued while the Prophet was living in Medina and therefore would have influenced the judicial practice there, a matter of importance for the Mālikīs given the relevance they accorded to Medinese ʿamal? But then why was it that a Ḥanafī who was a contemporary of Ibn al-Ṭallāʿ also became interested in the same subject at around the same time in another region of the Islamic world? Is this another one of those synchronicities that are not uncommon in the global Islamic world of knowledge, and that point to specific needs or trends in the scholarly milieu or even in society at large?

Why books dealing with specific subjects were written at specific times and in specific contexts is an issue that has interested me since the time I started doing research back in the 1980s. Spanish Arabism had as one of its missions to translate into Spanish the works written in al-Andalus in order to make them available to other scholars – mostly Medievalists – who did not have competence in Arabic, as these works were believed to offer relevant materials for writing the ‘history of Spain.’ My initial interest was in those Muslims and Islamic beliefs and practices that were subject to accusations of innovation, deviation and heresy in al-Andalus. I translated two books by Andalusi authors—Ibn Waḍḍāḥ al-Qurṭubī (d. 287/900) and al-Ṭurṭūshī (d. 520/1126)—dealing with innovations mostly in rituals (bidaʿ, sing. bidʿa), and in both cases it took me a long time to reach a satisfactory understanding—at least in my view.[7] I was greatly helped in eventually reaching this understanding by the fact of directing a project that had the aim of mapping the intellectual production of al-Andalus, Historia de los Autores y Transmisores de al-Andalus.[8] In HATA, the materials are organized in chronological order by author and discipline, one of which is Islamic law (fiqh).[9]

Fiqh was undoubtedly the discipline most cultivated by Andalusi scholars, as reflected in Table 1, which covers the period between 93/711 and 325/936. Just a note regarding the case of poetry: what the Table reflects by ‘Poetry’ are not works such as poetic dīwān-s, but verses—in some cases just a few of them—mentioned in the sources from which the materials of HATA have been extracted. Poetry in fact had a pervasive presence in Andalusi society, as it formed part of the daily life of the cultivated elites. 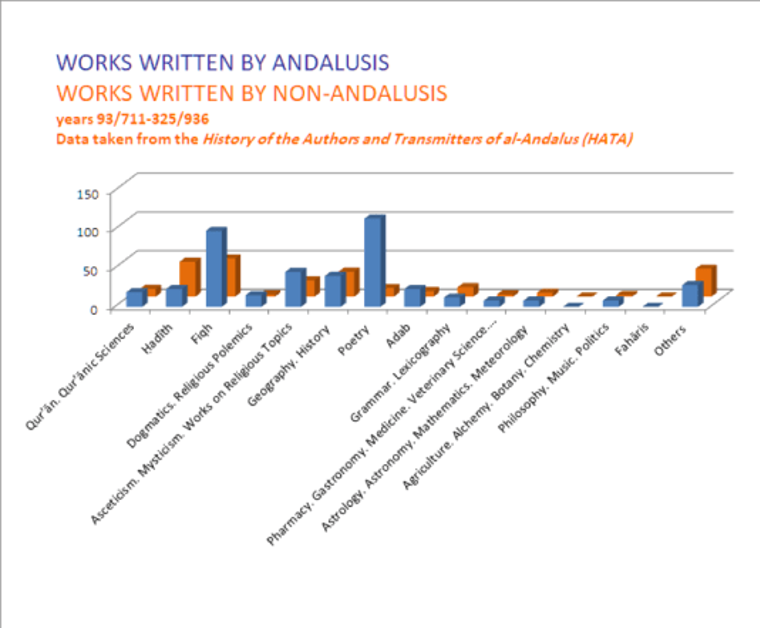 The prevalence of fiqh over other disciplines, as revealed in Table 1, is in principle unsurprising: after all, fiqh offered more professional opportunities than other fields of study. What is more noteworthy is how rapidly early Andalusi legal scholars began to shape, through works of their own, the reception of what they had learned during their travels to the East. The dynamics of the pedagogical process were undoubtedly relevant in this respect. The data found in HATA also reveal trends that could otherwise have been missed, for example how the effort to compile fatāwā and the type of resulting compilation—devoted to just one author or paying attention to specific regions and thus including legal opinions from many scholars—can be related to specific political situations in the Islamic West.[11]

Of special interest is how fiqh was related to other disciplines and how such relations changed through time. Dominique Urvoy was a pioneer in highlighting the different ways in which knowledge was structured according to different historical periods through the exploitation of the data found in the biographical dictionaries of scholars.[12] It is now possible to broaden and complement Urvoy’s findings thanks to new resources including not only HATA, but also the Prosopography of the ʿUlamāʾ of al-Andalus[13] and the Biblioteca de al-Andalus.[14]

The number of available primary texts has also hugely increased since I started my academic career. Back then, when working on Ibn Waḍḍāḥ’s Kitāb al-bida', very few works written in the 3rd/9th century that would have helped me in contextualizing his work were accessible even if preserved, and most were considered to have been lost. Now the situation has radically changed in general with respect to source materials from the Islamic world at that time, and in particular for al-Andalus, as shown in Table 2. HATA lists 147 legal works that circulated in al-Andalus between 93/711-325/936; of them, 49 were written by non-Andalusi authors and 98 by Andalusi authors. Of these 98, 60 have been preserved, a figure I find quite striking given that these data refer to such an early period. 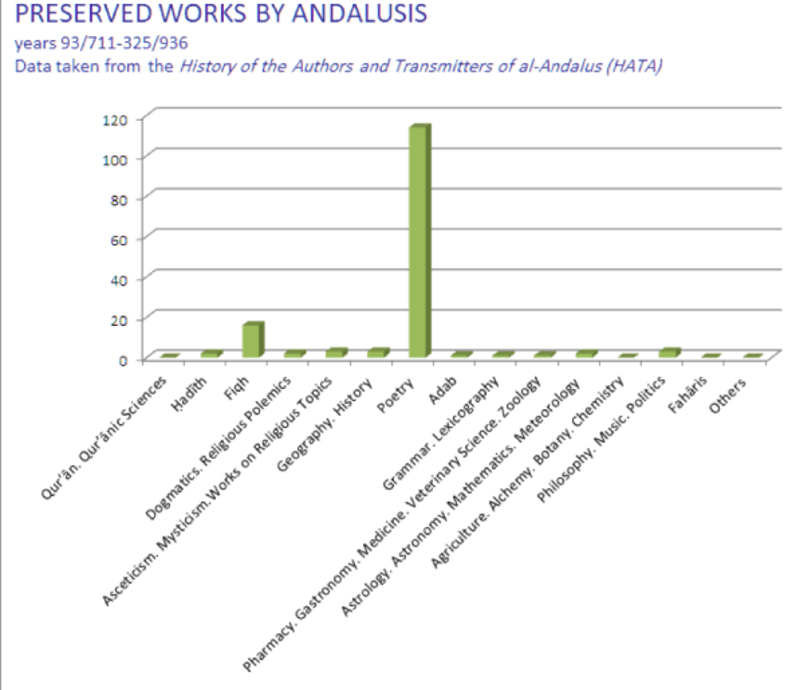 To sum up, for the case of legal writings in al-Andalus, we are now in the best possible circumstances for analyzing a variety of issues, such as:

– the rate of survival of works written between the 2nd/8th-9th/15th centuries and how, where and why they have been preserved;

– historical developments regarding the appearance of specific genres and how they relate to specific political situations;

– which works were the object of commentaries and how the writing of such commentaries influenced the transmission of the original works;[15]

– the popularity of certain works, how long their popularity lasted, and why;

– the identification of certain ‘canons’ in legal literature, especially in association with teaching, and how they evolved through time.

In order to make full sense of the data for al-Andalus collected in HATA – data obtained from biographical dictionaries, fahāris, historical works, quotations in other works, catalogues of manuscripts and many other sources – they should be compared with those of other regions, and in order to do so, similar data will need to be made available, something that will hopefully become a reality in the future. These kinds of resources will be of great help to fully grasp what motivated, for example, Ibn al-Ṭallāʿ and al-Marghinānī to tackle the Prophet’s rulings simultaneously in disparate contexts.